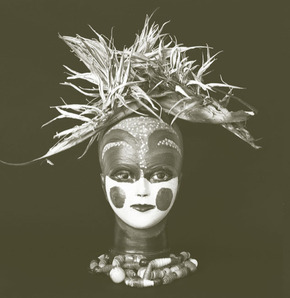 Magdalena Selina Langer is a sculptor, painter and jeweller who makes bespoke jewellery and one- off custom-made pieces. In her latest exhibition, Nature Unfolded, Magdalena works with organic botanical material, which she then turns into sculptural and jewellery pieces, creating imaginative and wearable pieces, all derived and inspired from nature, with a rawness and a tribal and edge.

In Nature Unfolded, Magdalena re-imagines plant matter into a new form of life through its whimsical other-worldliness, colour and art.

Magdalena uses nature as her main medium and transforms it into another art form. Her carefully made necklaces and head pieces are individually gathered, picked, sourced and stored over time, until the right time comes to create and transform. Some pieces have been ‘pulled out of the mud and then cleaned, some were made out of encrusted Banksia pods and then preserved and encapsulated in a special made box, and others were simply ‘seen and rescued’ from being discarded on the office pavement’.

Every piece contains a roundhouse effect, where almost everything comes together, in its full diversity; living, organic and art-full. Magdalena transforms rejected substances into sculptural amazement whilst not altering their shape but simply playing. ‘I invite plants from trees that have almost shed their leaves to take place in a totally different and new art form, and to be part of my artworks’.

Magdalena’s sculptures are the inspiration behind her beads, and her beads are also sculptural. Many of her necklaces are made out of canvas paintings which are then cut out and rolled into beads. Magdalena speaks of her beads as ‘having a heartbeat of their own, a contagious energy of creativity, and a freedom of movement that evolves’. ‘I almost step into my art works that come alive with me and are a part of me’... ‘I love it that people feel very special wearing the beads and that the beads are special for that person’.

The body of work in Nature Unfolded, is vibrant, earthy, juicy, colourful and guttural. It is even nearly edible. Magdalena’s thrilling imagination is expressed through her head pieces and complex necklaces, yet also through her mannequins and the body paint on the models which inhabit the exhibition room. And when you think there is a constant rhythm which can be worked out in the works, Magdalena then surprises us with an unexpected tease of her works to come, in this case, there is a hint of her more experimental pieces using plastic tubing, colour and string.

Some Career Highlights:Magdalena held numerous exhibitions in her café and galleries, including many sell-out shows. Proceeds were largely donated to charities of disadvantaged causes, such as to World Vision, Bernardo’s Home and to the Sydney Jewish Museum. A breakthrough major exhibition included a cross-cultural art project between the children of Paddington Public School and the children of the Solomon Islands. This exhibition was opened and supported by the then Consulate General of The Solomon Islands, c1994-1995.

Aleph is number one and it's the whole interaction of the beginning find my way - finding the roots through whatever avenue I can go to get there.